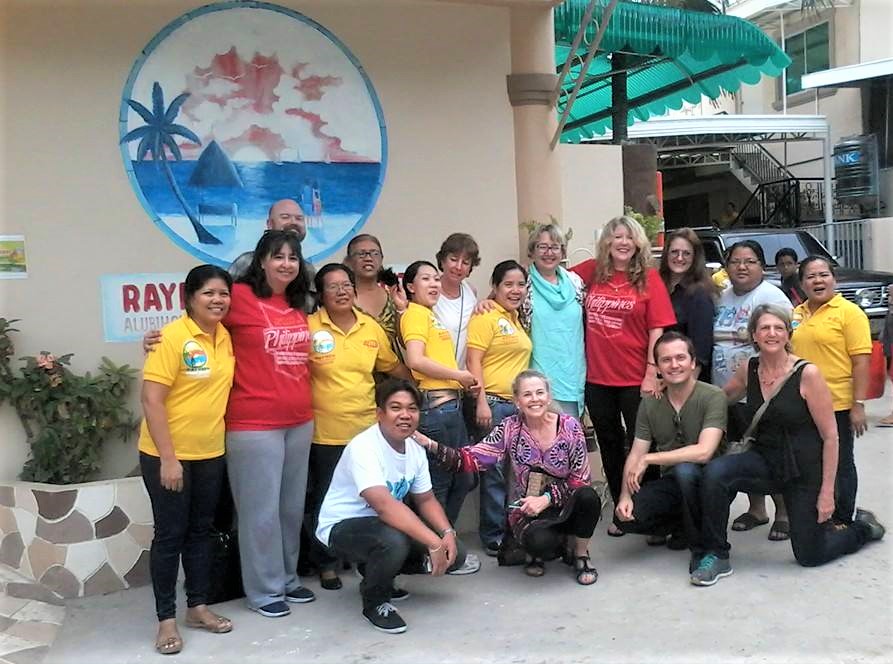 Typhoon Haiyan hit the Philippines as a Category 5 storm on the morning of Friday, November 8, 2013, at Guiuan, Eastern Samar. This super storm, referred to in the Philippines as Typhoon Yolanda, is believed to be the strongest cyclone storm to hit land in recorded world history, with winds as strong as 380 kph (235 mph). Haiyan took the lives of at least 6,300 people in the Philippines alone, and according to UN officials, 11 million people were affected by the storm, leaving thousands homeless and many without the means to make a living.

As part of a response project developed by Dr. Beverly Buckles, Dean of the LLU School of Behavioral Health and founder of the International Behavioral Health Trauma Team, and with funding provided by the Adventist Development and Relief Agency (ADRA), Dr. Buckles and faculty members Dr. Kimberly Freeman and Froylana Heredia-Miller traveled to the Philippines to provide resiliency training for members of communities that had been heavily impacted by the disaster that ensued after Haiyan. The Trauma Team first traveled to the Philippines in February 2014 to conduct research with Elaine Miller-Karas, Executive Director/Co-Founder of the Trauma Resource Institute and co-developer of the TRM (trauma resiliency model) and CRM (community resiliency model) models.

"We originally went to the Philippines [in February 2014] to conduct research, as part of a larger plan to empirically validate the use of the CRM model within the international setting," says Dr. Freeman. "The CRM model is a set of six wellness skills that can be used internationally for training community workers in ways to reach out and assist people within their own communities during times of distress. The TRM model is more treatment-based and is specifically designed for use by professional therapists."

Two months later, in April, the Trauma Team was asked to return to the Philippines to provide CRM training to personnel in communities impacted by Typhoon Haiyan. ADRA funded this program and helped coordinate and support the Trauma Team's efforts in bringing services and training to Filipino communities. An estimated fifty government social workers were trained on the CRM model during the first 5-day training program. During the second 5-day training program, the Trauma Team also trained an additional fifty ADRA workers, pastors, and community members, bringing the total number of CRM and TRM trainees to an estimated 100 individuals. The training provided first responders, social workers, and other professionals with an opportunity to take the models, implement them and give people, including themselves, internal resources.

"The CRM model teaches individuals to track and regulate their physiological reactions to trauma in a manner that allows them to more balanced and resilient in their daily functioning," Dr. Freeman explains. "The theory behind the model is that we have a natural way of functioning that generally allows us to problem solve and deal effectively with the ups and downs of life. However, when we experience stress or trauma we often lose this ability and can become overly anxious, depressed and/or immobile. By working with the body's physiological reactions, the CRM wellness skills are designed to help individuals get back into a more 'balanced' state so that problems can be managed more effectively."

The training is very engaging and hands-on; trainees are given lectures, demonstrations, and many opportunities to practice skills by using their own life experiences. The Trauma Team also accompanied the trainees into the local community and provided feedback during and after they had exercised their skills out in the field. Training is designed to be comprehensive and multifaceted so that by its completion trainees will have already formed a team that is prepared to go out and serve the community immediately.

Dr. Freeman reflects, "These trips allow me to get in touch with my clinical side, to utilize the knowledge I have, and also to learn a lot in return. I've learned so much from every community that I've traveled to on behalf of the Trauma Team. I'm amazed at how giving people can be, even in the face of tragedy and widespread disaster. These trips have become a really important part of what I do here at Loma Linda University as part of the International Behavioral Health Trauma Team. Being able to truly live the mission of Loma Linda University 'To Make Man Whole' is truly rewarding."

Watch as Lori talks about her experience working with and learning from the LLU International Behavioral Health Trauma Team: