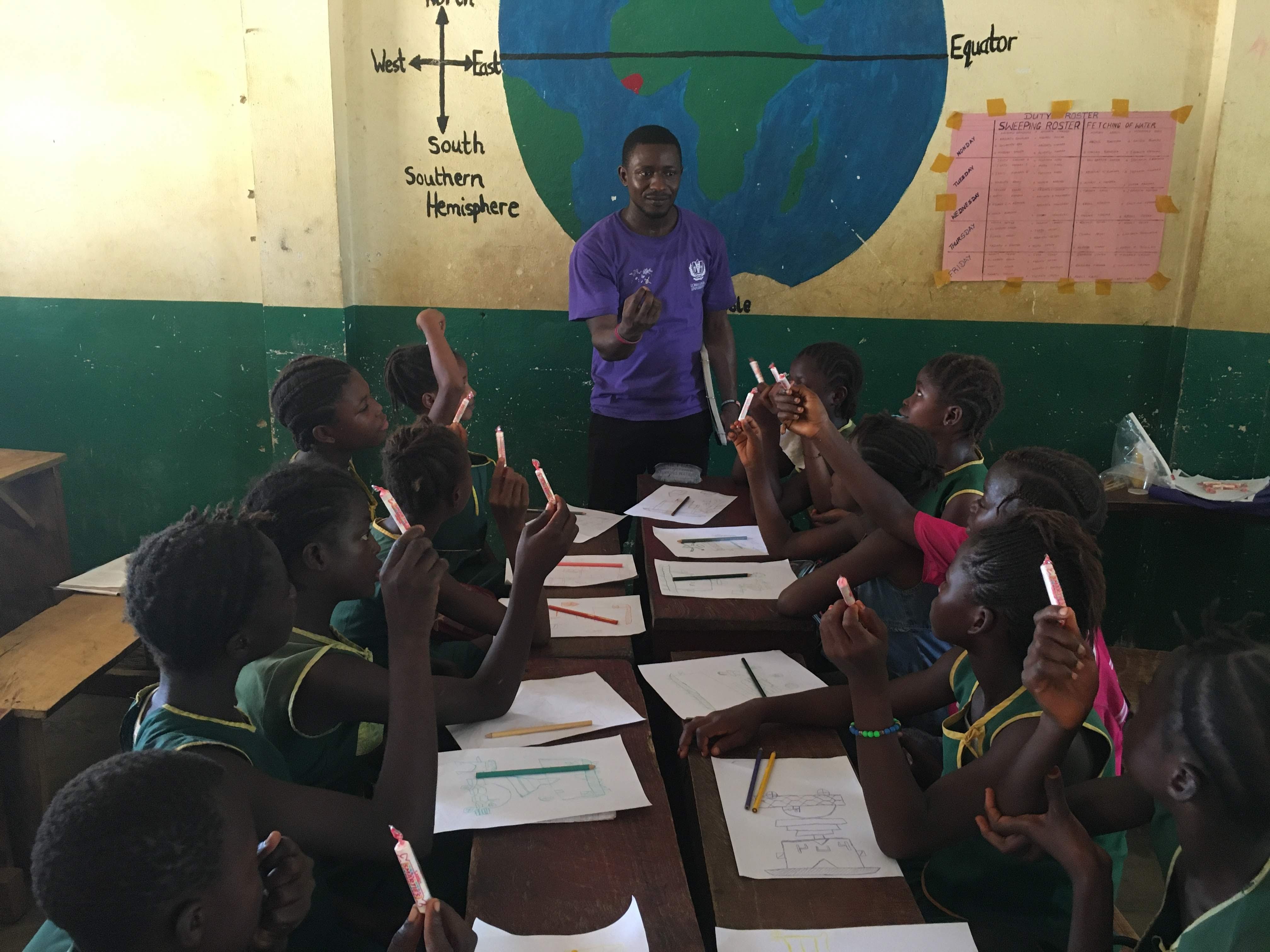 I have always enjoyed travelling. I have travelled the world by air, sea, and land--each providing its own unique perspective and experience. Some of my earliest memories are of plane rides, greyhound bus treks, the rhythmic cadence of trains hastening down the track, and cramped road trips across the country. The pleasure and vacation trips were always fun, but what I enjoyed most was travel with a mission and purpose. One of my first trips of this nature was in the early nineties, when as a teenager I travelled to Bucharest, Romania to help build a church. This experience ignited my passion for global mission, which has since evolved into a professional interest in global mental health research and practice.

Much of my research and practice has focused on integrated behavioral health, which is the integration of behavioral health services into healthcare settings. A few years ago I was chatting with a colleague about their recent trip to a refugee camp in the Middle East. She went with a small team to provide training to primary care providers on the integration of behavioral services into their patient care. She shared how the providers knew that behavioral health was vitally important to address the trauma, anxiety, and depression they saw in their patients. However, they went on to share, as medical providers they may see 60-100 patients a day, often not having more than five minutes to see each patient. With so little time and other pressing medical concerns, it can be very difficult to address the mental health needs of our patients, even though we know they are there. As we talked about her experience, we realized that we had to think differently about mental health and its implementation in low resource settings. Mental health services had to be distributed more quickly, implemented in a scalable way, and made easily transferrable.

This conversation led me on a five-year journey to find therapeutic approaches and interventions that met the aforementioned criteria with the goal of making the integration of behavioral health services more feasible in acute and low resource settings. Over the past five years, I have discovered over 100 approaches and have been trained or certified in over a half-dozen of those I found most useful. I was in the midst of this expedition when in 2017 I accepted a position at Loma Linda University to become the director of the Systems, Families, and Couples PhD program in the Department of Counseling and Family Sciences. As I settled into my position, the opportunity came to go to Samoa and train community leaders in an approach called the Community Resiliency Model (CRM)®. CRM is a low-intensity, guided self-help intervention aimed at teaching trauma responders to provide individuals, groups, and communities with a set of skills geared toward increasing resiliency, regulating the nervous system, and reducing distress. I had not heard of CRM before, but was intrigued by the approach. I was trained in the months prior to the trip and looked forward to seeing what CRM would look like in real world practice. While in Samoa I saw the amazing effects it had on both the providers and those with whom they taught. It was quick, scalable, and transferrable--I was sold! When I returned from Samoa, I was excited and eager to conduct research on the use of CRM in low resource settings. I did not have to wait long before an opportunity presented itself. However, before we move forward, we need to go back to 2015, in the midst of the Ebola crisis in Sierra Leone.

In 2014, the largest-ever outbreak of Ebola Virus Disease (EVD) began in West Africa, with the greatest severity taking place in neighboring countries of Guinea, Liberia, and Sierra Leone. By the summer of 2015, Sierra Leone had seen over 14,000 confirmed cases of EVD, with 3,956 deaths. In the aftermath of this crisis, the impact of EVD on children, families, caretakers, and communities was multi-faceted and devastating. The effects were profound, significantly affecting wellbeing and the navigation of daily life for those living in the country. All of this was compounded by the recent emergence of Sierra Leone from a long civil war during the 1990s and early 2000s. In the wake of these traumatic events, the Loma Linda University International Behavioral Health Trauma Team was called in to provide support and intervention in collaboration with the Adventist Hospital of Waterloo in Sierra Leone.

In this intervention, 40 community and health workers received the CRM intervention and reported significant symptom reductions in depression, anxiety, and PTSD, while also seeing improvement in emotional wellbeing and resilience. Six months later, 22 of the 40 individuals who received the initial CRM intervention received a four-day intensive training on how to teach the CRM skills to others in their community. This team of individuals then went out and shared the skills with over 800 community members and trained 59 local residents to also teach the skills to others. Those who received the intervention by the 22 Sierra Leonean trainers saw similar reductions in symptoms and improvements in wellbeing. However, what was most exciting was that those who were trained to teach also saw similar results in those they went on to teach. And there it was: a model that could be quickly taught, scalable, and easily transferrable! The Trauma Team had been using the CRM model since 2010 with tremendous success, but we needed more published research to showcase its effectiveness.

Fast forward to 2019, when an email is sent to one of the Trauma Team members from one of the CRM trained workers in Sierra Leone, asking for the team to come back and help them to scale up the use of CRM in the community. This is where I and other SBH faculty come back into the picture. You see, Sierra Leone is considered a low-resource setting for mental health services. A low-resource setting is typically characterized by a lack of funds to cover health care costs, on an individual or societal basis, which leads to one or all of the following: (1) limited resource access and availability (e.g., medication, treatment, etc.), (2) less‐developed infrastructure (e.g., clinics and structured services), and (3) fewer or less‐trained personnel. In one 2013 report, there were fewer than five practicing psychiatrists in the country and only one psychiatric hospital (Song, van den Brink and de Jong, 2013). Today, there are still fewer than 30 trained practicing psychiatrists and other mental health professionals in the country. Navigating these realities during the course of several 6 AM Zoom conversations--there is 9-hour time difference between Sierra Leone and California--it was decided that the best place to integrate and scale up services was in a place where there was the most potential for dispersion and impact. From these conversations it was determined that the best place to integrate a program initiative of this nature would be through schools, which was the genesis of the Families, Schools, and Community Engaged Together (FASCET): A Community Resiliency Model (CRM) Based Family Resiliency Program.

The FASCET Program is designed to decrease stress and increase overall wellness for fifth grade teachers, students, and parents in Sierra Leone. In this study we recruited 500 participants: 24 teachers from three primary school in the city of Waterloo, Sierra Leone, 240 fifth grade students, and their parents. A training was provided to instruct teachers in the CRM model prior to implementing the program in the schools. The objective of the study was to examine if the FASCET Program, a five-week, 10-session Community Resiliency Model (CRM) Based Family Resiliency Program adapted for a school based setting in Sierra Leone, would result in sustained improvements in teacher, parent, and child self-reported resiliency, overall quality of life, improved mental health (depression and anxiety), and reduced self-reported stress. Additionally, for teachers, measures of burnout and job satisfaction were collected. For parents and children, outcomes also included various measures of family functioning, such as family cohesion, communication, and parental stress. Outcome measures for children specifically included internalizing, externalizing, hostility, and prosocial behaviors. This project is still in progress, so we don’t know what we will find yet, but from the looks of it I am optimistic that we might have found one piece in the puzzle for helping to scale up mental health services in low-resource settings in global contexts.